The recent statement by Alistair Buchanan, Ofgem chief executive about Britain’s power generation surplus over the next five years, may to some have seemed alarmist. However, his comments appear to be taken from an Ofgem report, written by Karen Mayor and Socrates Mokkas dated 5th October 2012.

Whilst it goes into considerable detail, 2 charts below, copied from the report highlight the current generating capacity and what it is expected to be by 2017.  Figure 1.1 from the report shows the generation by fuel type availability over the next five years and it is evident that the average cold spell demand (ACS) will remain around 56GW, although the availability of coal fire generation will fall. 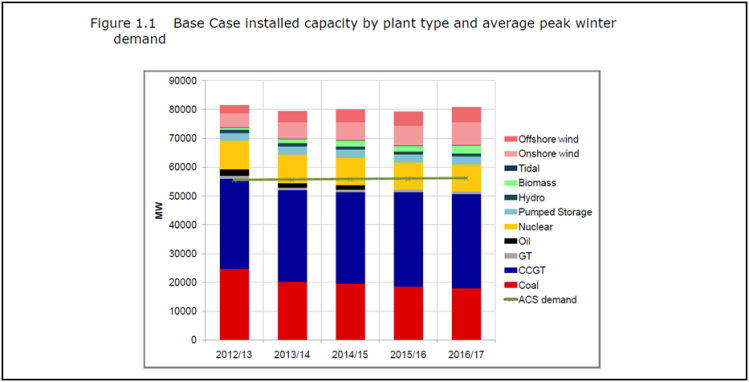 Figure 1.2 shows that there will be a substantial reduction in coal, about 33% of the 30GW currently available and oil fired generation capacity, plus the loss of some nuclear plant, to be replaced by CCGT, biomass and wind generation.

Table 1 illustrates three snapshots of half hourly generation demand data exported from the New Electricity Trading Agreements, Data Summary website managed by Elexon. It illustrates the November 2012 to February 2013 winter peak demands, showing generation by fuel type. The peak demand of 56.91GW occurred on the 12th December 2012 at 17:00 and it can be seen that coal powered generation was the major contributor to the UK demand, closely followed by CCGT, nuclear, pumped storage, 1GW of oil generation and hydro; . Also, it is evident that metered wind generation only delivered 0.5GW or 1% of UK electricity demand, in fact in the absence of energy through the French interconnector, it only bettered open cycle gas turbine in its contribution to the UK energy demand, with a capacity factor of 9% of the metered wind turbine potential of 5.31GW. Wind power generation only achieved Renewable UK’s claimed CF (37%) at the peak demand on the 28th November 2012 and a poor 17% CF compared with a slightly increased metered capacity on the 16th January 2013.

It would be easy to look at the peak winter demand this year and say that a 31% surplus is a reasonable safety margin but, one has to consider the delivery capability of the plant being retired against that which it is planned will replace it. To do this one has to return to the Ofgem report which suggests that total generation capacity may have fallen to 80GW in 2017, with a loss of 4GW coal plant this year and 12GW of coal and oil retired by 2015, with a limited conversion to biomass. Also, 0.5GW of nuclear generation will be lost in 2013. This plant being replaced by a mixture of CCGT, biomass and wind but, it is written into the report that onshore/offshore wind capacity could increase by 5.5GW to 13GW during the 5 years.

Fig 1.2 seems to estimate that 9GW generation will be retired and replaced by 5GW alternative generation. Therefore, if it were assumed that the UK generation capacity in 2017 is down to 78GW and a similar peak day demand occurred; 13GW wind capacity at 9%CF would yield 1.17GW (2%)National Grid share. This means that circa 55GW of generation will need to be provided by the remaining and new fuel generators, plus re-commissioned plant.

The growth of wind power generation in the UK must be undertaken in the knowledge that conventional generation is available to protect against the unpredictable availability of wind. The Ofgem, figure 1.2 above suggests that security of supply is more likely to be achieved if coal plant is replaced by generating stations which can deliver reliable output to match demand such as, CCGT, biomass and nuclear, if agreement can be reached on costs and subsidies, rather than too much reliance on intermittency of wind power.